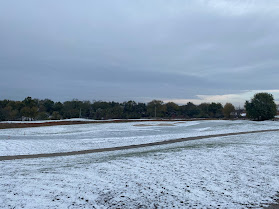 It's the end of October and we have already had our first measurable snowfall of the season!  Despite the early brush of winter weather, the more seasonable fall temperatures will return soon and that means we can get back to work on some needed rejuvenation projects around the golf course.  We experienced a huge surge in rounds this season and while it is great to see so many people out enjoying the golf course, all of that extra traffic really took its toll on some of the more sensitive areas of the golf course.  Cart and foot traffic combined with late summer heat and drought really stressed some of the higher traffic areas of the course.  The seeding of tees and fairways is already underway and will continue in the weeks ahead.  With the cooler temperatures and wetter weather, we should really start seeing some germination where seed has already been planted.  Sod will be needed to fix some of the worst areas where seeding would not address the issues in a timely manner.  We have already begun work in some of these areas.  The exit area of the fairway on hole number one was sodded last week.  We also laid sod around the the greenside bunker. 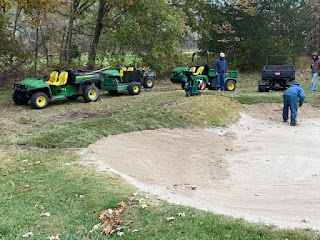 The new sod around this bunker will fix a bare area that resulted in contamination of the sand with soil.  We can now remove the contaminated sand and replace it with fresh white sand returning it to its original condition and greatly improving the appearance of the bunker complex around the green.  We did similar sod work along the first bunker on hole number 2 as well as along the cart path separating the first and second fairways. 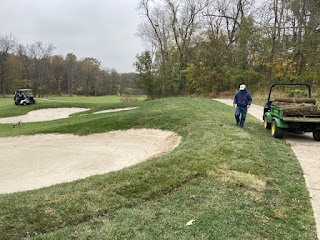 The mainline leak on hole number 3 has been fixed and sod has been laid.  We backfilled along the top of the hillside on hole 3 and replaced sod in this area as well. 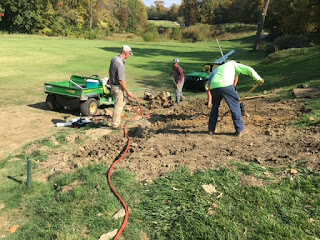 The walk up areas leading to the white and blue tee boxes were also stripped of weak turf and sodded with fresh fescue fixing the washed out areas along the cart path and really improving the look of these areas. 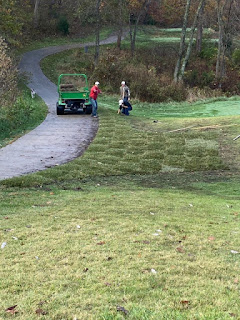 We also replaced sod around the greenside bunker on hole five and along the cart path next to the black and blue tee boxes on hole 6.  The walk on to the green on hole 16 was also completely stripped,  leveled and sodded. 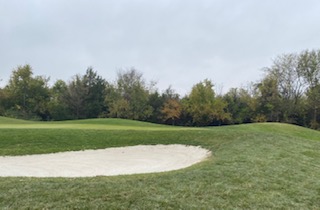 Overall, 7 pallets of sod were laid last week and that is just the beginning of our plans this fall.  We have sub-contracted with an outside company who will come in and address some larger areas that will need soil and sod work.  This work will be underway very soon and is going to make huge improvements to areas that have needed attention for the past few years.  Having this work subcontracted will allow our maintenance staff to focus on other areas of the golf course.  Fall is a busy time here at Sycamore Ridge but it will be an exciting time for us all.  We can't wait for you to see all the improvements we will be making so STAY TUNED!
Posted by Sycamore Ridge Super at 9:19 AM No comments:

Today is October 2nd, and the course had its firs frost delay this morning.  This has to be as early a frost as I can remember in my years as a golf course superintendent.  This creates a perfect opportunity to once again discuss why we delay play when we have frost on the grass.  It really is quite simple, when there is frost on a blade of grass, and you apply traffic to that grass, the edges of the frost will puncture the cell wall of the grass and kill all of the cells.  If the crown of the grass is punctured, the entire plant will die. 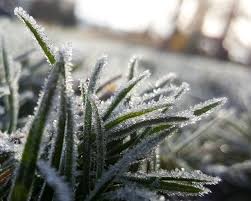 As we get to November, we will shift our stating tee to number ten everyday.  The back nine always becomes ready to play much faster than the front nine. The sun exposure is much quicker on the back nine, plus the lower elevation on the front nine are the reasons for this.  The colder morning will require that we move our first tee time later to minimize delays caused by the frost.  We do all of this to prevent damage to the grass that can happen as easily as someone walking on it. 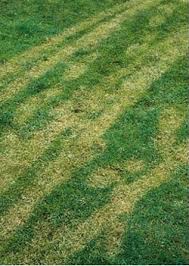 We do everything we can to minimize your inconvenience as golfers, and realize that your time is valuable.  So please know that we will always get you on the course as soon as it is safe for the grass.