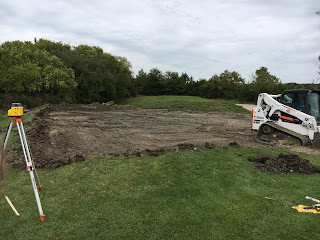 During the last week of September, we started a project to construct a new nursery green near the tee complex on hole number one.  This nursery area will allow us to be quicker to react to any turf loss on the greens on the course, and because the growing medium is a match, there should be a better blending of the surfaces when patches are installed. 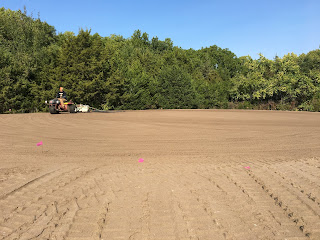 A company was hired to come in and flatten out one of the old tee boxes that is no longer used and create a surface for the nursery green.  They created an area of about 4000 square feet and capped it with a sand and peat moss mixture to match the material our greens currently grow on.  It took one day for them to move the soil for the foundation of the green, and a second day to move the greens mix into place to grow the grass on.  Each layer was compacted to prevent settling of the materials.  A 1.5-2% slope was created on both the subsurface and the finish surface.  This slope will allow for water to drain correctly.  The sand layer was measured many times to ensure that it was a uniform 8" depth everywhere.  After the depth and slope were perfect, a finish grading was done to the surface.  This finish created a smooth surface for the planting of bentgrass seed. 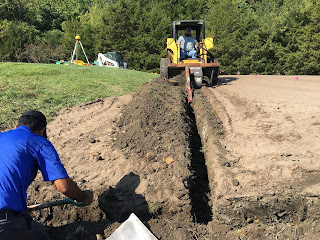 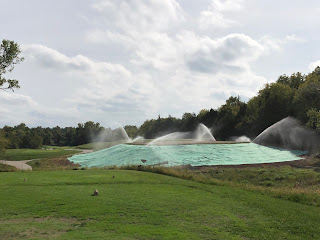 When the construction was finished, we began installing irrigation around the green.  New pipe, control wire, and irrigation heads were installed and connected with the existing irrigation control box on hole number one.  The trenches were settled and compacted after filling.  This process should reduce the settling of the soil in the trenches.  Once the irrigation installation was complete and back-filled, it was time to seed and protect the disturbed area.  Nutrients were applied and incorporated into the sand mixture to help the seedlings grow.  The seed was carefully applied in two directions and tracked into the sand.  A ring of sod was placed around the green surface to stabilize and define the edge.  Seed and fertilizer were placed on the surrounding soils before a mulch mat was installed to hold the seed and soil in place and help the seed germinate more quickly.

I can only hope that I will never need to harvest sod from this nursery.  However, when growing Creeping Bentgrass greens, that is not likely.  It is very common for golf courses to have an area like this for repairing any damage or turf loss on the greens.  Hopefully, within the next few days, we will see a green fuzz growing on the surface of the green.


Posted by Sycamore Ridge Super at 9:05 AM No comments: